I love any movie Anne Hathaway is in, (I’m a huge fan of The Devil Wears Prada, have watched it over 20 times with my daughter). So when I saw the commercials for The Intern, I knew I  had to see it.  The Intern is a comedy that stars Anne Hathaway as Jules Ostin, the founder of a fashion based e-commerce company who hires Ben Whitaker (Robert De Niro), a 70-year old widower bored with retirement, as her intern. Ben is seeking something more in his life. “There’s a hole in my life and I need to fill it,” Ben explains in the opening narration of The Intern. “I still have music in me,” he adds. 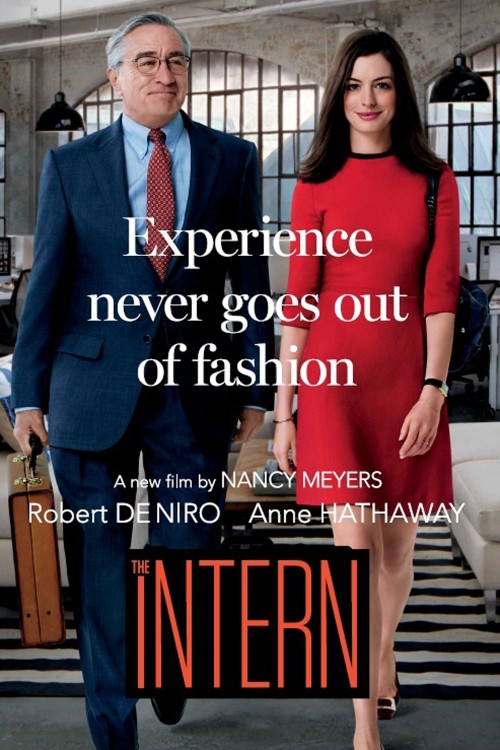 So naturally, after coming across a flyer seeking senior interns for the company Jules runs, Ben simply cannot contain his excitement and decides to apply as an intern. The company, About the Fit, is ironically seeking people with a lifetime of experience instead of kids who have spent the last four years updating their Facebook status and getting drunk at frat parties. So naturally, Ben is perfect. Of course he gets the internship after an interesting interview process (being asked at age 70, “What do you see yourself doing in 10 years?)” and that’s when the film takes off.

The plot revolves mainly around Jules, how she must figure out how to balance being the owner of her company while preserving her personal life as well. It’s told from Ben’s perspective, as he is her intern, and very quickly figures out her life. As can be expected, they form a great friendship based on loyalty and trust, a partnership where both learn a lot from each other.

Wouldn’t you enjoy working in this environment? Photo Courtesy of http://www.theinternmovie.com

The Intern was written and directed by Nancy Meyers who is well-known for “What Women Want,” “Something’s Gotta Give,” and “It’s Complicated. Yes, you may be thinking that it’s a chick flick, but I personally love chick flicks. This one deals with the world of work, retirement, millennials in the new workforce vs. the old school workplace. In my opinion, the message in this movie is that a lot can be learned and shared between generations. In today’s world, many think the older generation is just not “with it” simply because they don’t know how to use the latest smart phone or don’t have a twitter account. Yet this film shows us that there are still many things that the older generation can teach the so called “millennials”, that simply can’t be learned from the internet.

I will say, although I really enjoyed this film, after all I love anything these two actors are in, I did find it a bit slow at times. Having said that, I still think it was a great “feel good” film and I recommend you go check it out if you haven’t had a chance yet.

Have you watched The Intern?  I’d love to hear your thoughts.

41 thoughts on “The Intern”