It’s that time of year.  College acceptance letters are beginning to arrive and your child will soon be heading on a new journey.  All you can think about is how much you will miss them and if they are truly ready to be on their own. But first, they must choose a school, and choosing the right one will be a challenge for the entire family. It doesn’t help that the complete college preparation and selection process nowadays is beyond overwhelming for both parents and students. There are so many schools to choose from, so many scholarships and programs to consider, SAT/ACT scores, extra-curricular activities, on and on and on, and I will say, not every school is for every student, as with most situations in life.

Our daughter started college last fall and we are blessed that everything is going well so far.  She just headed back to school from winter break and was excited to return (a very good sign). 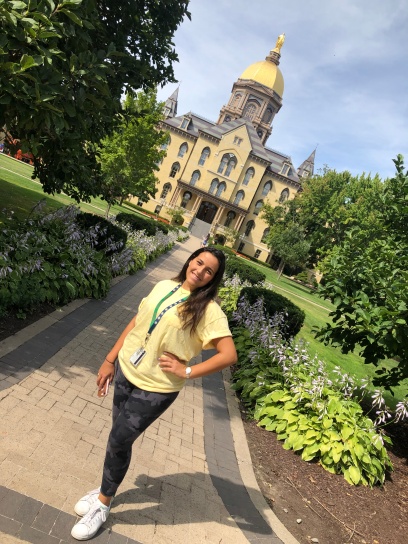 Our daughter at the University of Notre Dame during freshman move-in weekend.

We visited several schools throughout the selection process and learned many lessons along the way, here are a few of them:

Plan accordingly.
So many schools, so little time.  Make sure your child has done research and has an idea of what they are looking for and then as a family, decide which ones are on the short list.  Sometimes there are so many schools to visit, we as parents may try to cram in as many in one visit as possible. Please do not make this mistake. There is usually a lot of driving involved between schools. Additionally, visits can sometimes seem overwhelming with information overload.  At times, our daughter preferred to skip the information session and just tour the grounds (after a while, most of these sessions all start to sound similar).  Also, if you visit too many schools on one trip, you may risk your child being exhausted by the end and not really showing interest in the final few (this happened to us as well).  And if you live in the south, make sure your child visits schools up north during the winter months, as the extreme temperature changes will be eye openers for some!

Have fun.
Just because you will be visiting college campuses does not mean you cannot have fun (a day trip to Disneyland was a must on our UCLA and USC trip). Visits are comprised of more than just information sessions and campus tours.  Our daughter and a friend from high school were on the same trip and they met up with some students from the university that had previously attended their high school. This provided a great opportunity for them to visit dorm rooms and get a perspective from current students.  Get to know the town, this may be your child’s home for the next 4 years. Where are the nearest restaurants, shopping centers, movie theatres, etc. Do a bit of sightseeing if time permits. There will be something captivating about each school, even those that will eventually get eliminated as choices.

Talk.  A lot.
In the evenings, usually while we were having dinner or settling in for the night, we would ask our daughter how the day went and if the school met her expectations.  Many times, schools that she was excited about were quickly dropped off the list and vice-versa.  But let your child express their thoughts and feelings and only provide advice as needed.  After all, this is (mainly) their decision.

I hope you enjoy your college road trips when the time comes.  I would love to hear how they went…

So when I first heard of Netflix a few years back I couldn’t understand what the craze was all about?  After all, I religiously continue to watch Grey’s Anatomy, House Hunters, Blackish, Modern Family and many other network shows, including programs available through HBO, Cinemax and Showtime (The Affair was amazing).

So why would I need Netflix in my life?

Well, flash forward a few years and I can now completely understand.  I am OBSESSED.  So many great series and original movies to watch, and the best part is the binging (is there any other way)?  It’s also great to watch older series that were once on network TV such as Gilmore Girls, Jane the Virgin and The Good Place, which I had never gotten around to watching.  Even my husband has been hooked on a few series. In addition to the fan favorites such as The Crown, Outlander, Ozark and Cable Girls (all highly recommended), here are some of my off the beaten path favorites:

By far one of the funniest series I have ever watched.  Can’t even choose a favorite character because I love them all.  A wealthy couple, video store magnate Johnny and his soap opera star wife Moira, suddenly find themselves completely broke. With only one remaining asset, a small town called Schitt’s Creek, which the Roses bought years earlier as a joke, this once-wealthy couple must give up life as they know it. With their two spoiled children in tow (who you will fall in love with) and their pampered lives behind them, the Rose family is forced to face their newfound poverty head-on and come together as a family to survive.

This is a great series I accidentally stumbled upon and the story line captivated me. It is a Spanish (Catalan) series so you will need subtitles.  If you could go back and do things differently in your life, would you?  I think we all have a moment in time when we ask ourselves that question. The plot revolves around Eduard who loses wife Elisa and their kids in an accident. Later, a mysterious woman known as Dr. Everest teaches Eduard how to travel to alternate universes, which leads him to try to find a world in which his family can be saved. It does start off a bit slow, but keep watching the ending is fantastic.  I even got our teenage daughter hooked on it as well, and she loved it. 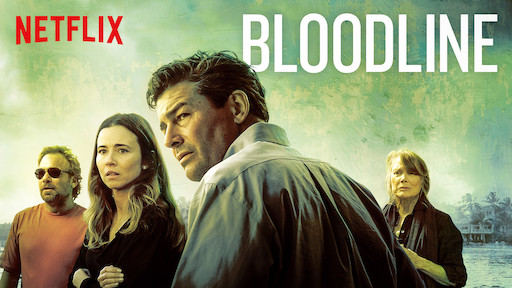 This series has an excellent cast, and I personally love Kyle Chandler. Bloodline is a dramatic thriller that explores the demons lurking beneath the surface of a contemporary American family. The Rayburns are hard-working pillars of their Florida Keys community, but their past contains dark secrets that they hope remain buried. Paranoia and mistrust build as lies pile up, alliances are shattered, and an unthinkable crime takes place. The tight-knit family’s formerly harmonious relationship deteriorates, and good people are forced to consider doing very bad things. 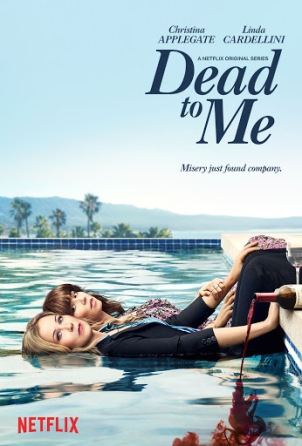 This is a great series starring two of my favorite actresses.  Jen’s (Christina Applegate) husband recently died in a hit-and-run, and the sardonic widow is determined to solve the crime. Optimistic free spirit Judy (Linda Cardellini) has recently suffered a tragic loss of her own. The ladies meet at a support group and despite their polar-opposite personalities, become unlikely friends. As the women bond over bottles of wine and a shared affinity for “The Facts of Life,” Judy tries to shield Jen from a shocking secret that could destroy her life as she knows it. The dark comedy explores the weirdly funny sides of grief, loss and forgiveness.

Living With Yourself – 1 Season

Paul Rudd is one of my favorite actors, so right away I was intrigued, not only by him but by the plot as well.  Miles Elliot lives an ordinary and routine life with a wife and a job. His job is not going well and he and his wife are struggling to conceive. A co-worker, Dan, tells Miles he can improve his life by going to a spa called Top Happy Spa. Despite not knowing what the spa involves, Miles decides to take a risk and spends all of his family’s savings on a visit. Hours later, Miles wakes up buried in a forest, digs his way out and tries to return home. At home, he finds another version of him. Confused, the two Miles decide to return to the spa, which was the site of his last memory before the grave. There he discovers that he has been cloned.

This one is so quirky and definitely worth seeing, just for laughs.  Our daughter started watching it before I did and she kept telling me I would love it.  I have always really enjoyed Drew Barrymore as an actress, but to me it felt as if Timothy Olyphant (plays Joel her husband) stole the show. His character is exceptionally funny.  The story centers around Sheila and Joel, who are living a quiet life, raising their teenage daughter in Santa Clarita, California. Their world unexpectedly changes when Sheila goes through a dramatic transformation that sends her down a road of death and destruction — but leaves her looking and feeling better than ever. 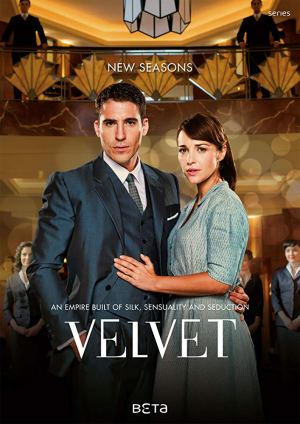 Another Spanish series so again, subtitles, but I promise it will not disappoint.  In 1958 Spain, Galerias Velvet is the place to be seen and shop and it hides one of the most wonderful love stories ever told. The love story of Ana and Alberto. She is a humble dressmaker. He is a young man destined to inherit the majestic empire of fashion that his father manages until now. Amongst fabrics and haute couture dresses that recall a dream life, both of them are willing to break the rules of that time and live their love despite of what others might try to impose them. However, destiny holds for them too many things that will put their true love to the test; so many that will even turn it into something forbidden.

Which Netflix series are you hooked on?  I’d love to hear…

Happy New Year to all of my readers! I apologize, I have not been on here for a while (very busy past 4 years) but I finally have some time again to dedicate to this special place, which I have always enjoyed so much. I look forward to continue sharing travel tips, vacation planning (my personal favorite), restaurant recommendations, book reviews, gift suggestions, parenting advice, etc. I’m certainly not one to stick with resolutions but I will share this one quote, which I believe is a great one for starting the new year:

May 2020 bring all of you many blessings, good fortune, love, health and happiness!!!

What are you most looking forward to in the coming year? I’d love to hear…