Summertime is around the corner (in Miami, it’s already here) and the kids are getting restless. Especially after all of these months of quarantine. If you’re out of ideas trying to keep them busy, here are some fun activities for your pool or backyard/outdoor space. 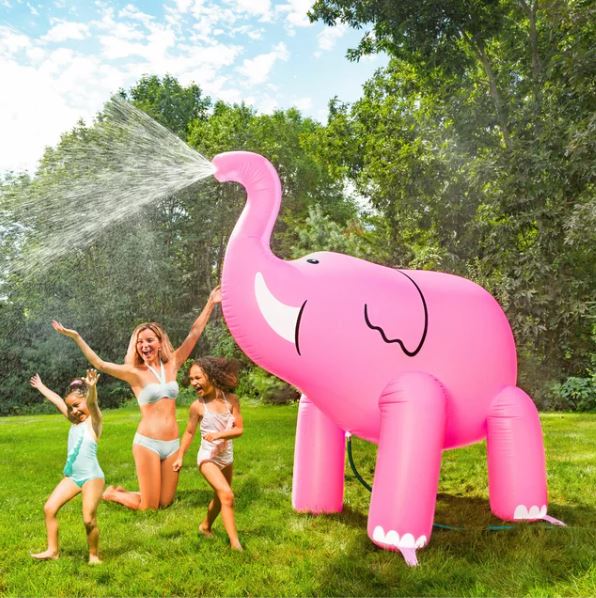 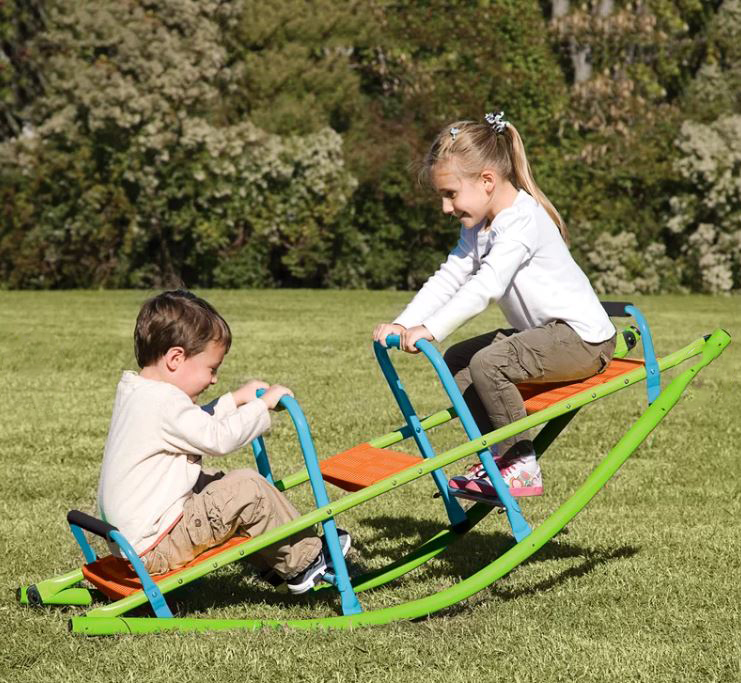 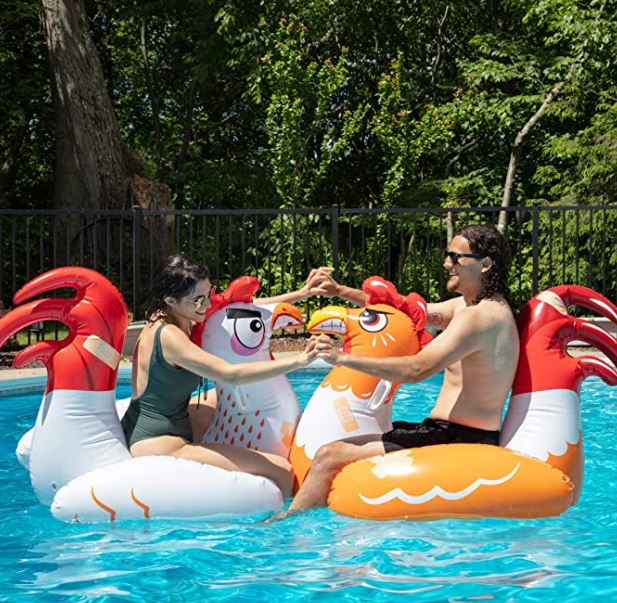 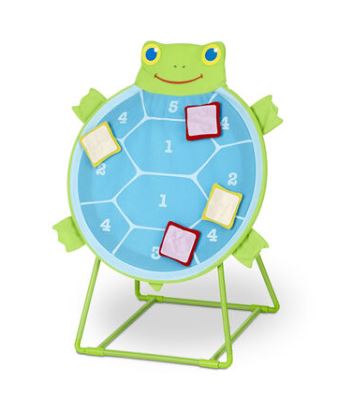 Drink Cooler for the adults too! Available at Funboy.com; $25

I hope you and your families have fun with these outdoor activities. As for me, I am truly enjoying my pool time for now and can’t wait to get to the beach as soon as it opens up. Have a safe and fun summer!

My favorite type of food is Italian, always has been. I am always trying out new Italian places everywhere I visit. Thankfully, living in Miami allows me many options. My husband is not big on dishes with creamy sauces or cheese (don’t ask), however he loves seafood so he always finds a nice fish dish to enjoy. Miami has many amazingly delicious Italian eateries, however, Strada is one of my favorites, from the marvelous food to the side entryway, which reminds me of many restaurants in Italy, to the friendly wait staff. Its sister restaurant/pizzeria, Farinelli 1937, located directly across the street, is another great eatery in Coconut Grove, also not to be missed. 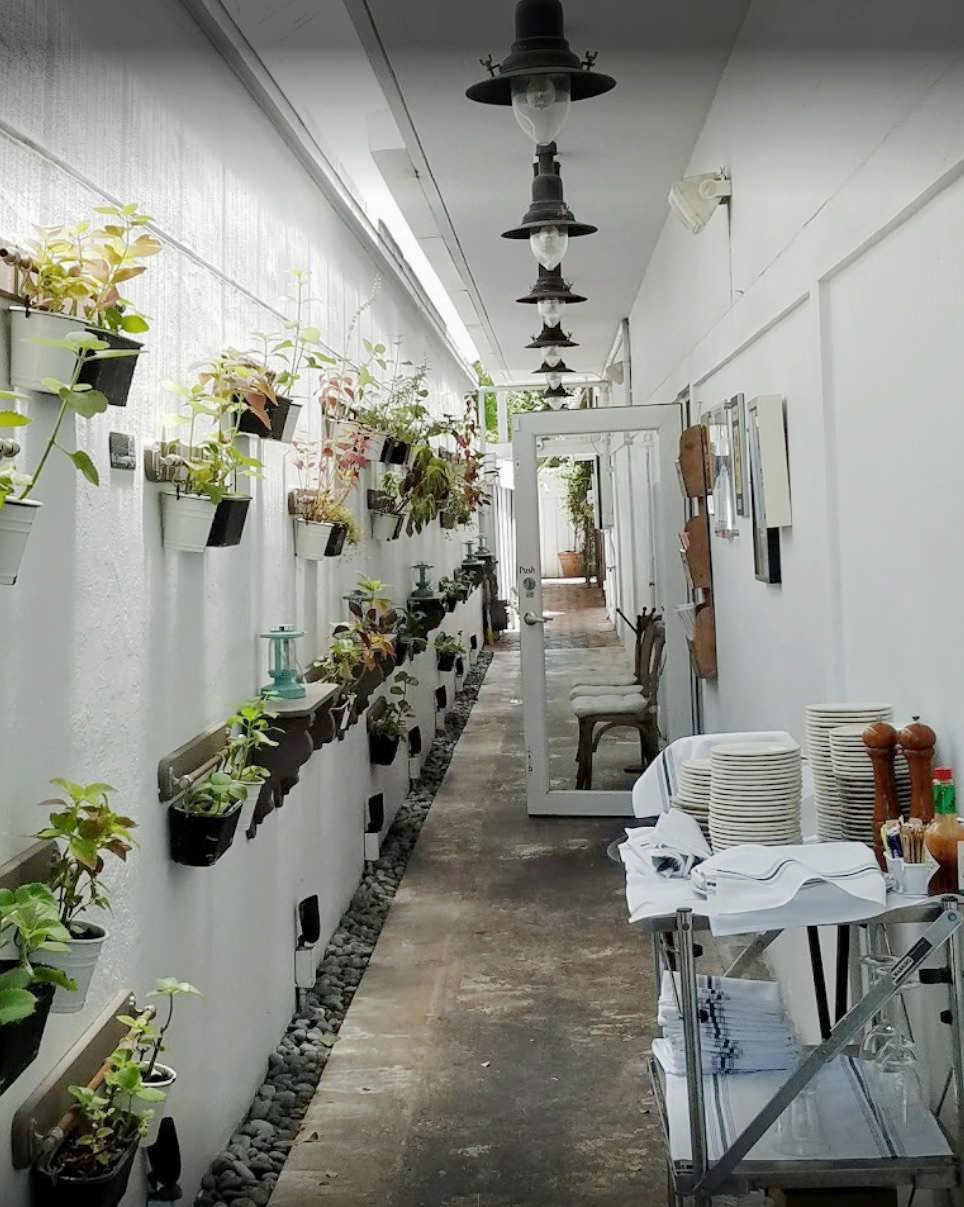 Side entryway of Strada

Sitting outside in the evenings. Photo courtesy of Strada.

At first glance it’s hard to choose from so many amazing dishes, but here is what we started with: 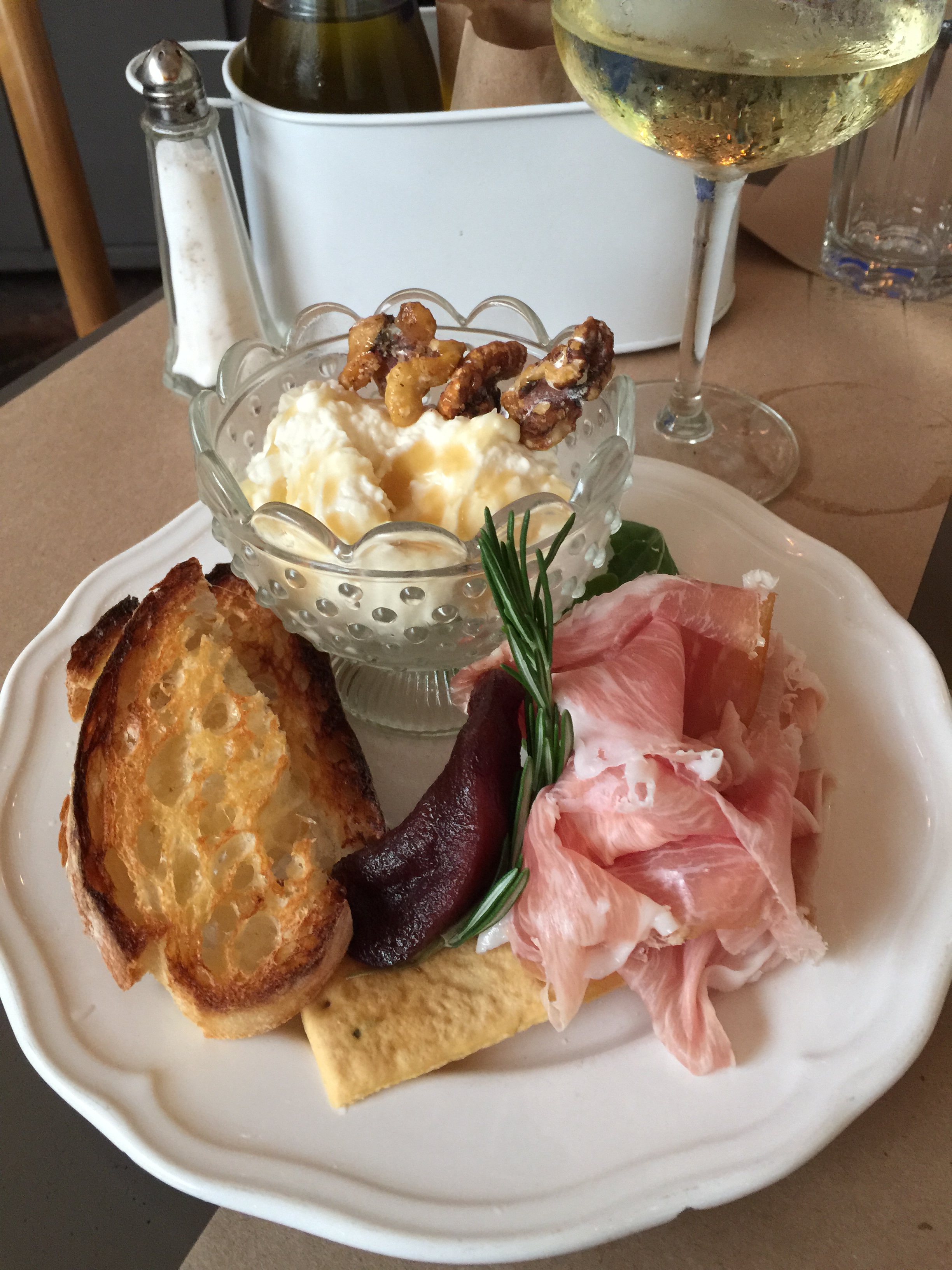 Then on to the main dishes.  I ordered the pumpkin agnolotti which I always order here, it is amazing (I am a creature of habit), and my husband ordered the salmon.

For dessert we ordered the panna cotta, one of my all time favorite Italian desserts, and it was delicious.  Just the right texture too.  And it came in a cute tiny mason jar to boot:

You basically cannot go wrong with this place.  All of the dishes we have tried have been excellently prepared and the ambiance is fantastic, located in Coconut Grove, with outdoor seating available as well. Makes for an enticing evening out.

Have you dined at Strada?  I would love to hear what you enjoyed most…

Sicily, in particular, Taormina, had been on my bucket list for a while. If you follow my blog, you know that I LOVE Italy and have blogged about many of the cities I have been to. So I finally decided that I could no longer put this off.  Being that Sicily is an island (the largest in the Mediterranean) we decided it would be best to leave it for the end of our 2-week trip throughout Italy, figuring we would be pretty exhausted (we were) and would benefit from relaxing by the hotel pool or beach. We flew from Rome to Catania and hired a private driver through Viator (very affordable) to drive us to Taormina. As usual, I must start with our hotel. We stayed at the NH Collection Taormina, located in the heart of town, a few steps away from Corso Umberto I and the city center. The room was spacious with a gorgeous bathroom and the best part was the panoramic view from our balcony, simply stunning. I would advise staying at any of the hilltop hotels, there are several nice ones to choose from offering magnificent views.  Here are some of the views from our room:

Views of Taormina from our room 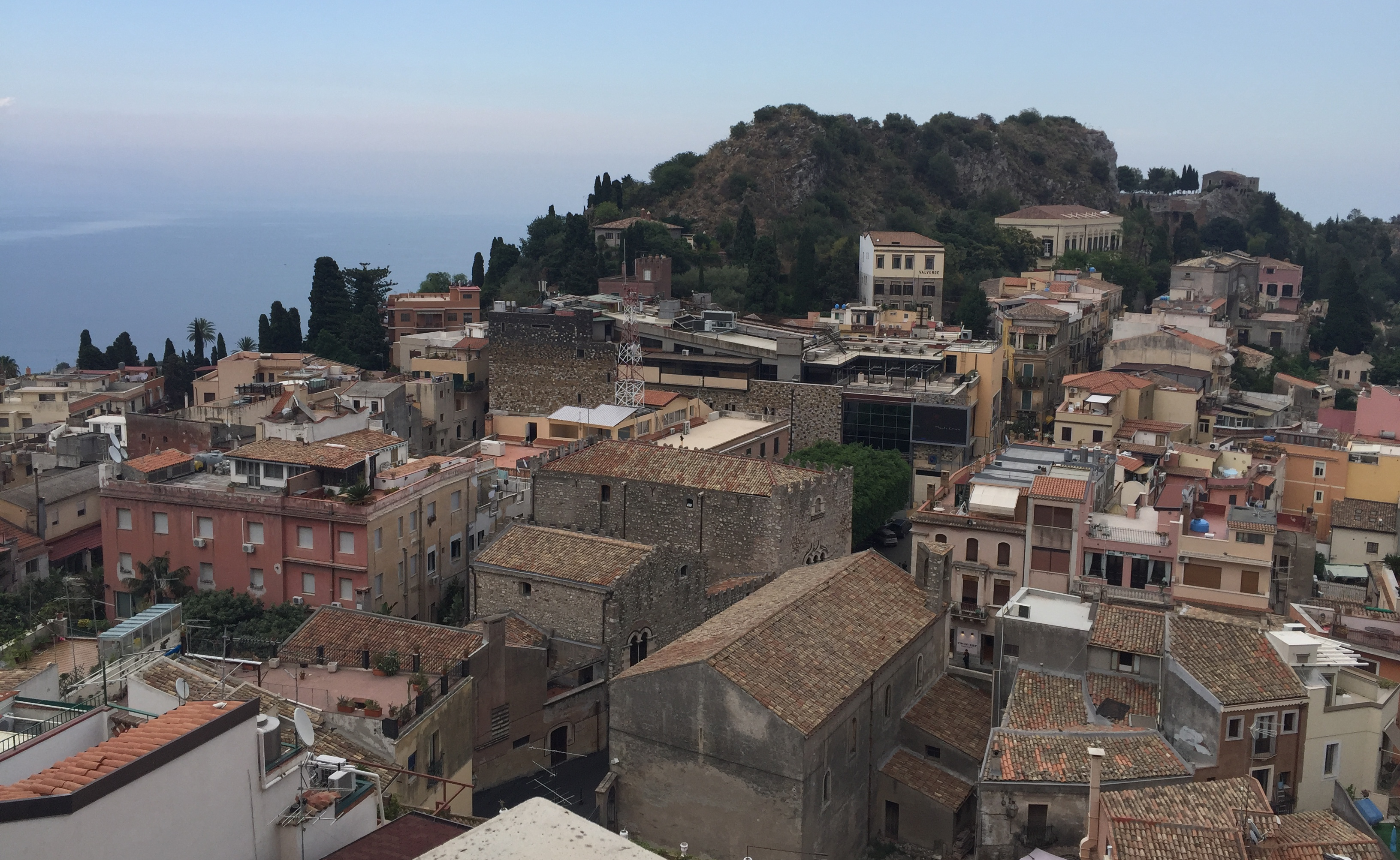 Our daughter admiring the views from the infinity pool

Stroll Corso Umberto I
Bordered to the north by Porta Messina and to the south by Porta Catania, the Corso exhibits many buildings from different eras. Also full of numerous shops, bars and restaurants, the cobblestoned, pedestrian street is always very busy, especially in the evenings. While you will encounter the obligatory typical souvenir shops, make sure you don’t miss some of the other boutiques selling some beautiful ceramics and high end items, typical of Sicily. The Corso is the main street in town, which also has many small alleys and side streets to discover, leading to more shops and eateries up and down some steps.

The many buildings on Corso Umberto I

Balconies seen all over the Corso

Fruit stand on a side street in Taormina

Piazza IX Aprile
Piazza IX April, Taormina’s main square, is a fantastic stopping point along your stroll on the Corso and a perfect place to enjoy a gelato while people watching. Make sure not to miss the  breathtaking views of the Ionian Sea and Mount Etna from the piazza over the water, truly spectacular! You can find many important monuments on this piazza, such as the early-18th-century Chiesa di San Giuseppe, which represents a beautiful example of Sicilian baroque, with its double staircase located in front of the entrance. Another beautiful church on the piazza is the Church of Sant’Agostino with a commanding presence and a terrace that overlooks the Messina Gulf. Also on the piazza is the Torre dell’Orologio (the 12th-century clock tower) which leads you through to the Borgo Medievale (Medieval Quarter) and eventually to the Piazza del Duomo. 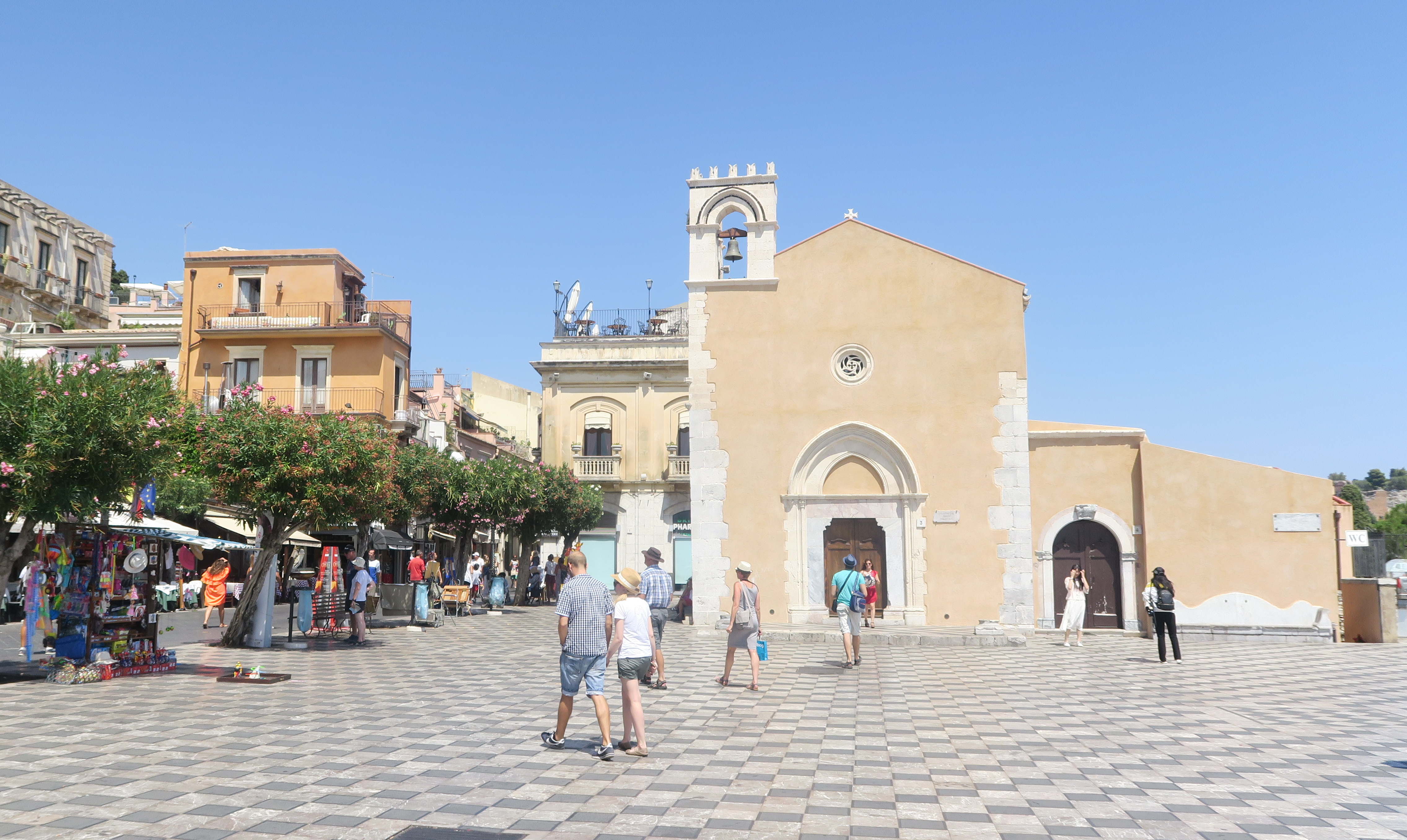 Also on the piazza, the Church of Sant’Agostino

The piazza full of tourists in the evening

Piazza del Duomo
The path on the Corso from the clock tower though the medieval quarter will lead you to the Piazza del Duomo, another great gathering spot. On the piazza stands the Duomo of Taormina, hence the piazza’s name. In the center of the square you will also find the Quattro Fontane di Taormina, a Baroque-style fountain featuring a centaur, representing Taormina’s city symbol. However, the statue atop the fountain isn’t a straightforward centaur. Not only is the figure female rather than male, it also only has two legs (the back two) rather than four. No one knows why the centaur is not typical but the people of Taormina have adopted the statue as the town symbol. You will find many folks sitting around the fountain in the late evenings, enjoying the crowds and having gelato.

Duomo of Taormina and the Quattro Fontane di Taormina

Sitting by the Quattro Fontane on a beautiful evening

Another view of the piazza

Another side street off the piazza

The Duomo at night

Pasticceria Gelateria D’Amore
One item you can find all over are cannoli, as they were originated in Sicily. We enjoyed many cannoli and gelatos in various places but we really liked Pasticceria D’Amore. The store has a window where one can observe them while they’re making the cannoli, and they offer a great variety of gelatos and pastries. 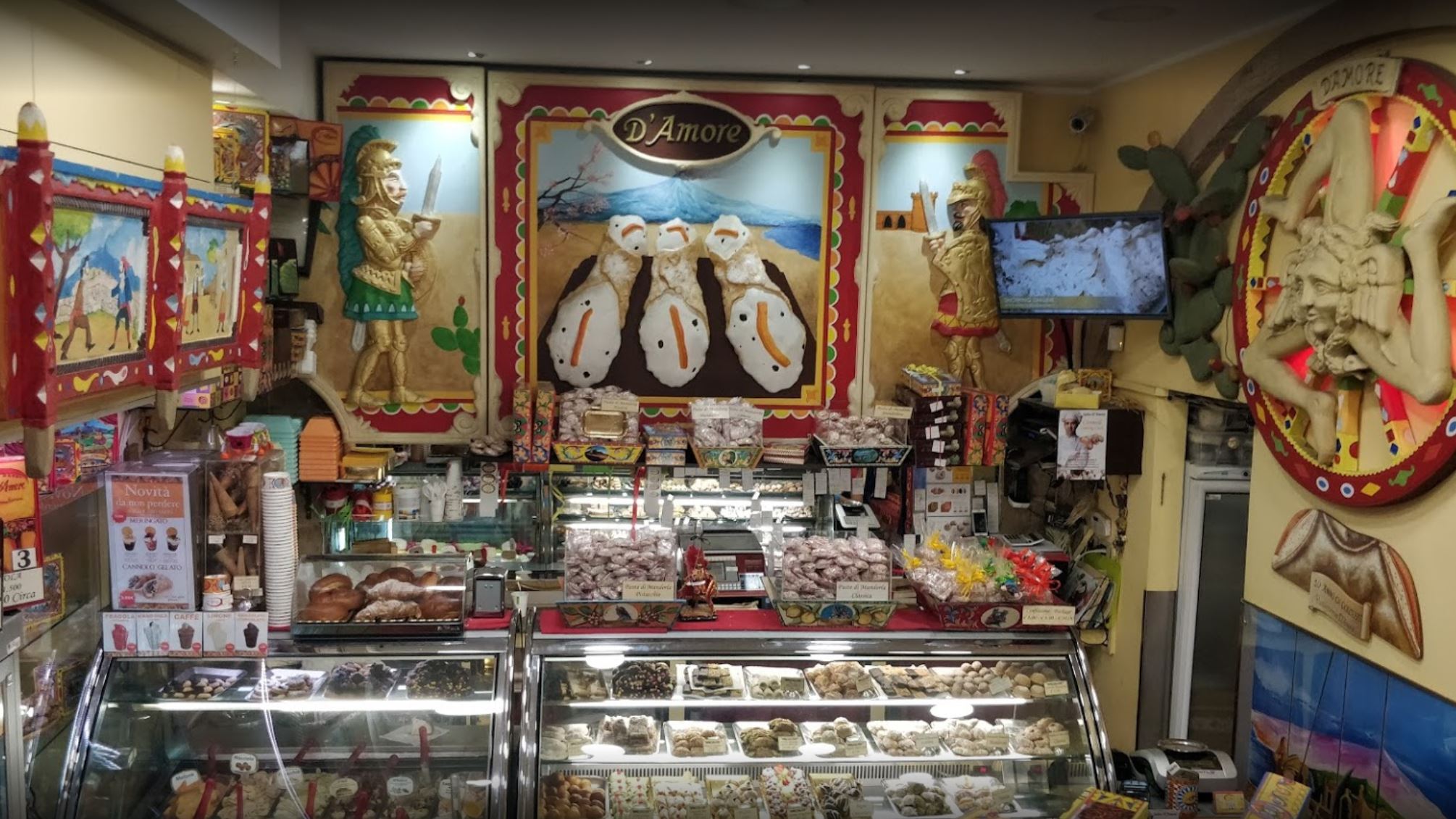 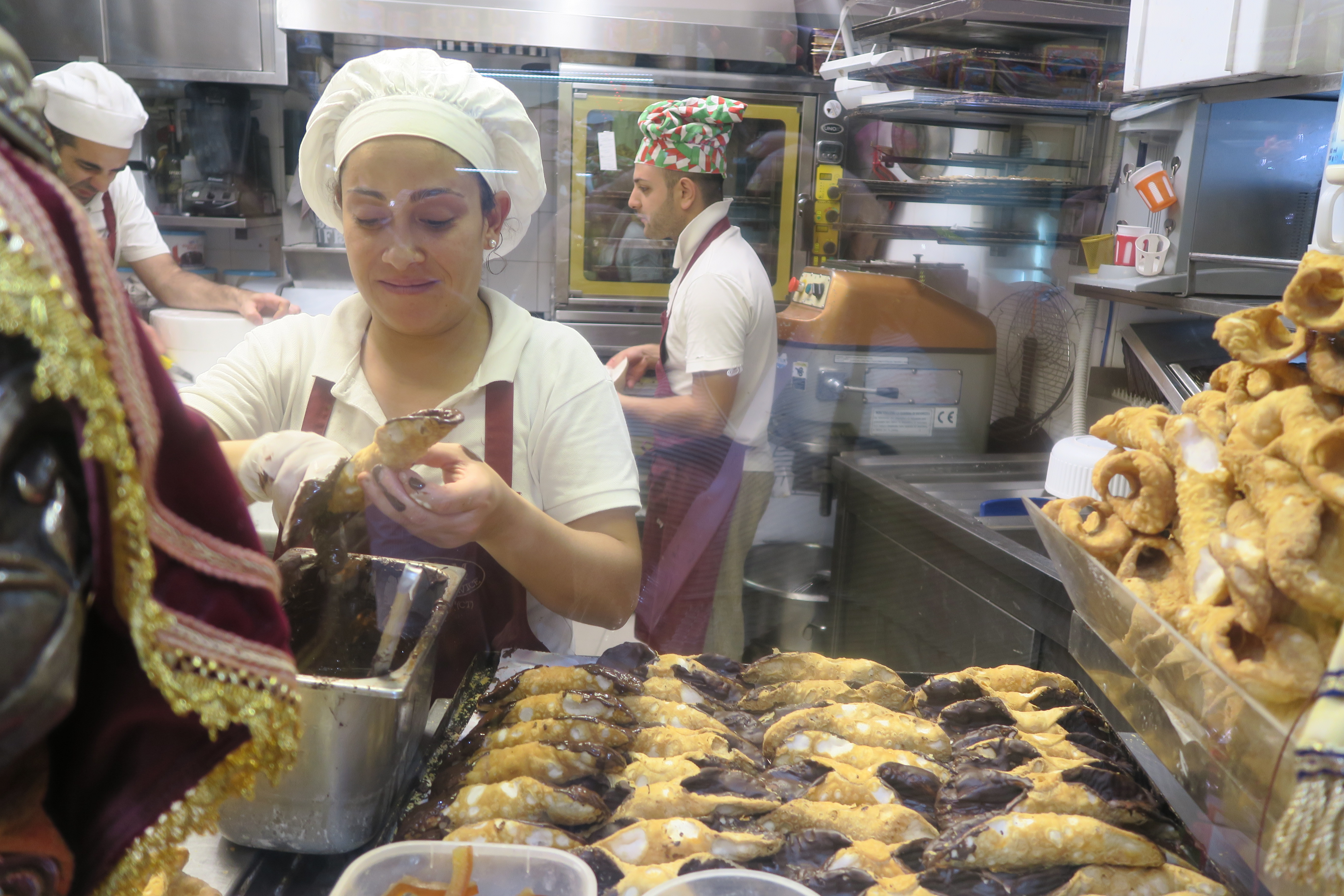 Cannoli with a variety of fillings being prepared

Greek Theater (Teatro Greco)
A visit to the ancient Teatro Greco is a must, especially if you love the ancient monuments and ruins found throughout Europe. Despite its name, the Greek Theater is actually an ancient Roman structure. The ruins you see today date primarily from the 2nd century A.D., although the theater was started in the 7th century B.C. Taormina’s Greek Theater sits high above the town’s famous beaches, so visitors who climb uphill to see the ruin are rewarded with gorgeous views of Taormina, the beaches below and the Mount Etna volcano.  Many events are held at the theater, click here for the schedule of artists, plays and concerts. This is also the venue for the Taormina Film Festival held every year in June.

Another stunning view of the theater

Taormina Funivia
The Taormina Funivia (cable car)  connects the town center with the beach at Mazzaro. It makes getting down to the beach or back to your hotel easy and quick, especially in the hot summer months. There are eight cable cars in the Taormina-Mazzaro Funivia system that are in constant rotation, depending on the season. During the busiest months, cable cars run every 15 minutes, and the trip from one end to the other takes less than five minutes. 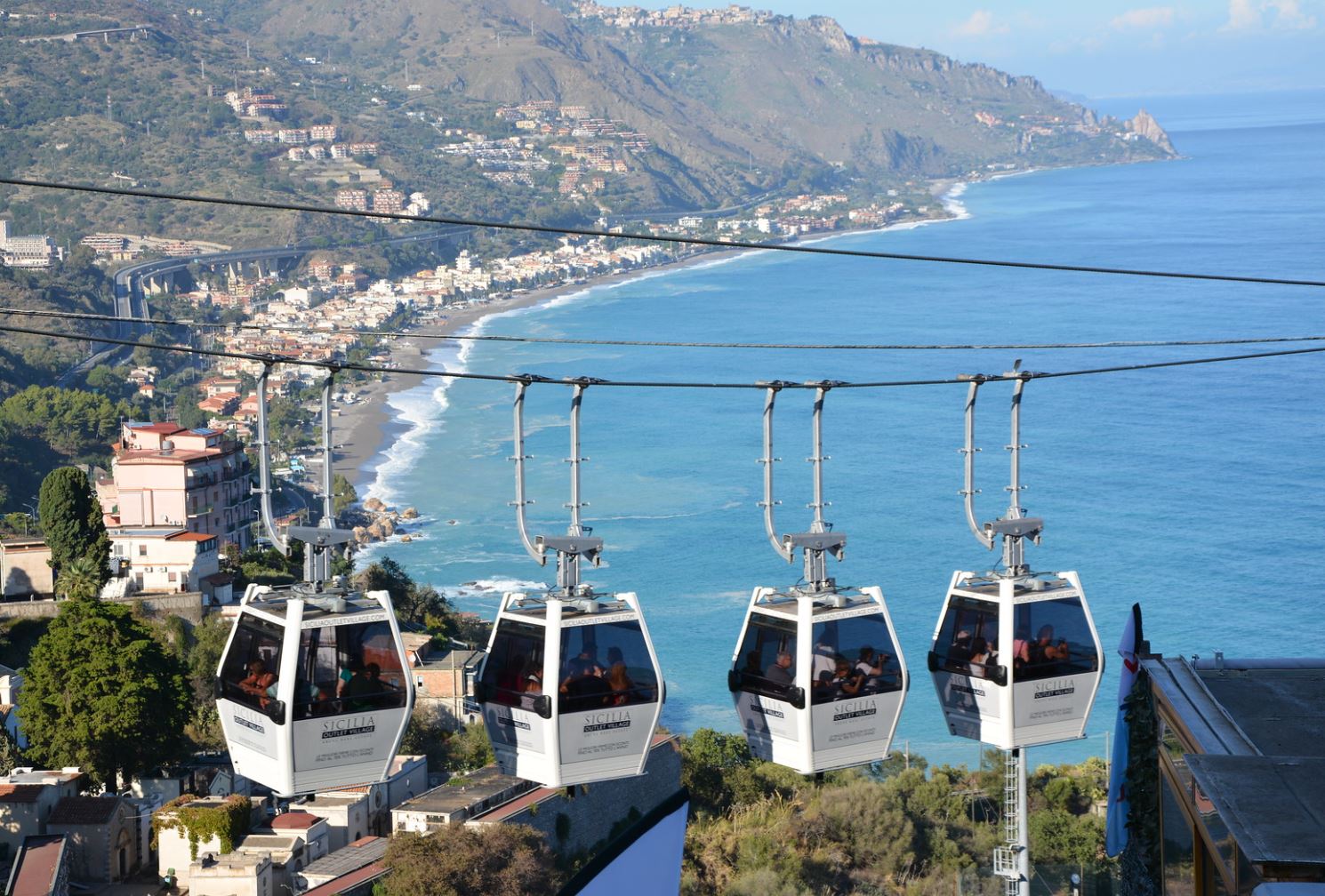 Here are some more photos of our trip for your enjoyment:

The stunning views of the sea from Piazza IX April 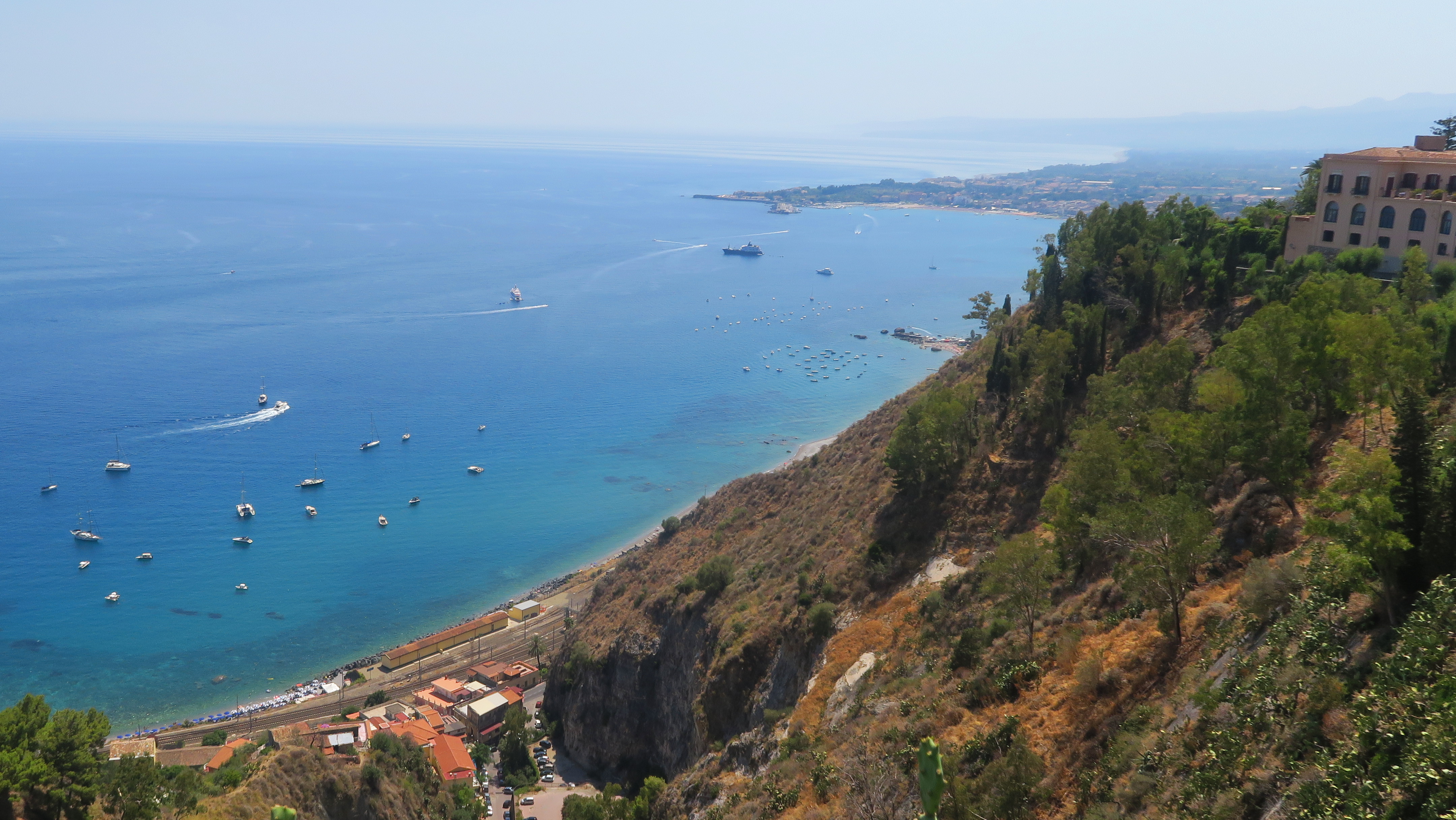 More amazing views from the piazza

And some more views… 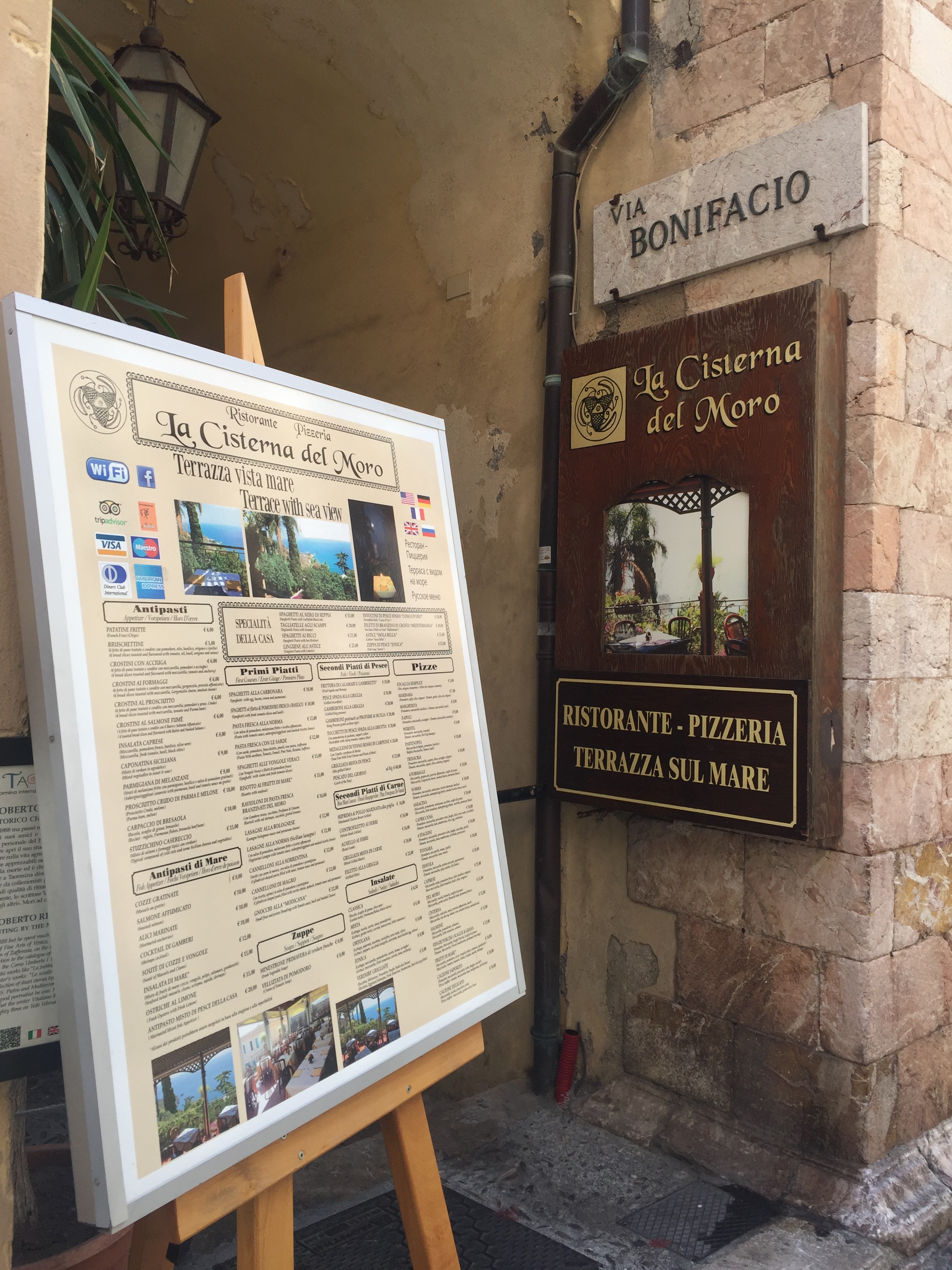 Dinner at this delicious pizzeria

One of the MANY cannoli we had on this island!

One of the side streets off Corso Umberto I

One of the gates into the old town, Porta Catania di Taormina

We started our stroll onto the Corso through the other town gate, Porta Messina di Taormina

Have you visited beautiful Taormina?  I would love to know what you enjoyed most!