So after watching Boy Meets World, many moons ago, and remembering that it was a very sweet sitcom of the 90’s, I was excited about Disney’s spin-off for my daughter, Girl Meets World, which premiered on the Disney Channel, June 27th.  Although I was not as disappointed as I have been with other Disney shows in the past (click here for my tween TV post), I wasn’t completely impressed either.

While I love the concept of seeing Cory and Topanga still together as married adults (well, very young adults, they haven’t aged a bit), with their own family, Girl Meets World, is not as innocent.  Cory is now a history teacher at his daughter Riley’s school, so of course he will be dishing out advice just as his mentor Mr. Feeny did on BMW.  But as with Feeny, boundaries are crossed. The conversations and antics that take place in Cory’s classroom, would never occur in the real world. And 12-year-old daughter Riley, is very sassy and a bit disrespectful, however, deep down she likes to do the right thing.

The plot lines are silly (what parent today allows their 12-year-old to ride a NYC subway alone?) and the parents clueless. I had my fingers crossed with this pilot, hoping that it would mimic its predecessor, however, this just felt like yet another new Disney show, with Cory and Topanga as part of the cast.  Having said all this, my daughter thought it was cute, and I’m sure she’ll be watching it again.

Something that Disney will have to work on a bit is the mischievous BFF. While Shawn was the kid from a broken home, with a heart of gold, and an eye for mischief, Maya isn’t a troublemaker from a blue-collar background. Maya pushes Riley in similar ways as Shawn pushed Cory, but Maya is no Shawn! Everyone loved Shawn, while Maya right now just seems to be a very bad influence for what appears to be a kind-hearted Riley. But I’m sure they will develop that storyline some more, and show us why Maya acts the way she does (probably neglected and/or misunderstood by her parents somehow). 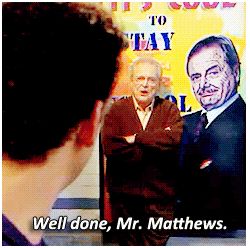 My favorite part of the pilot was at the end, when we see Feeny walk out of a stay-in-school poster to offer reassurances to Cory. This made me wonder if Feeny had died at the end of the BMW series, but I’m pretty sure he didn’t. I can only assume that he will be making guest appearances, or maybe even joining the cast later on.  This might actually be a good thing.

I’ll have to give this show a chance and see if Disney redeems itself.  Did you watch the pilot, and if you did, what were your thoughts/impressions?